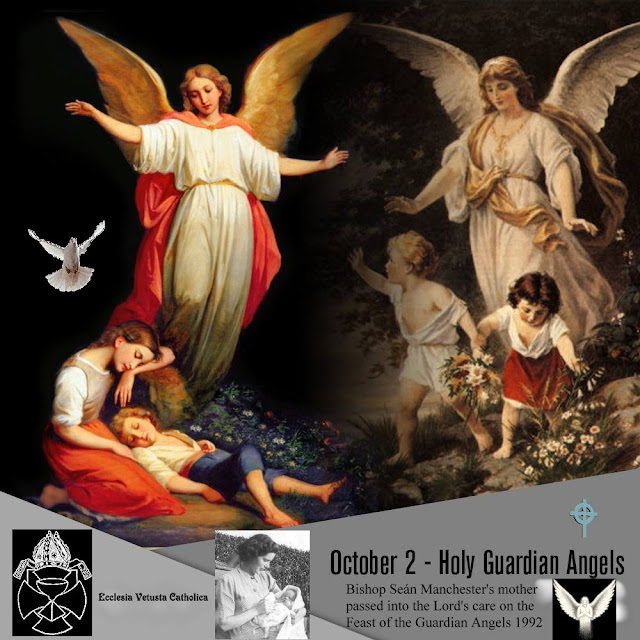 My mother introduced me to St Teresa of Avila and, later on, to St Thérèse of Lisieux. Her death on the day following the feast of the latter was the most difficult moment of my life. Her last breath came at twenty minutes past five o’clock on the feast of the Holy Guardian Angels 1992. All I can remember is my father’s distant voice proclaiming: “She’s gone.” Two little words that were of themselves devastating ― yet I knew in my heart she had not gone at all, but had passed into the Lord’s safekeeping where she would be for eternity. Like her favourite saints, my mother remained as fragrant as flowers in death, resisting decomposition until the last; even when I replaced the lid on her coffin in the stone chapel for the very last time. She became the “first person I would anoint and on whose behalf I would recite the prayers for the newly dead, since receiving the mitre.” [The Grail Church, Holy Grail, 1995, page 102.] My mother’s funeral was also the first I would conduct in my episcopal office. It was held at Islington and St Pancras Cemetery on the feast day of St Teresa of Avila, one of the two saints my mother was most close to; the other being St Thérèse of Lisieux. I also conducted a funeral service in the same cemetery chapel some eight years later for my father. 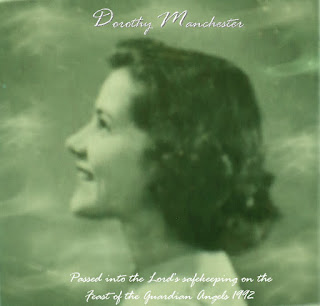 This year my mother would have celebrated one hundred years had she lived, and I am now the same age when she fell asleep and departed this earthly realm twenty-six years ago. Requiescat in pace †

Do not stand at my grave and weep;
I am not there. I do not sleep.
I am a thousand winds that blow.
I am the diamond glints on snow.
I am the sunlight on ripened grain,
I am the gentle autumn rain.

When you awaken in the morning’s hush,
I am the swift uplifting rush
Of quiet birds in circled flight.
I am the soft stars that shine at night.
Do not stand at my grave and cry;
I am not there, I did not die.