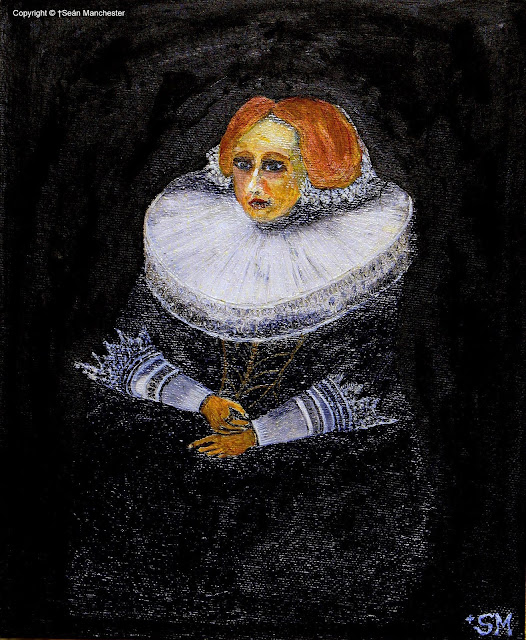 Elizabeth was Arthur's first wife. He worked part-time in the afternoons at my London studio darkroom from 1963 to 1968. In the mornings he delivered milk for United Dairies Ltd. Elizabeth was called "Zibby" by all who knew her. When I came to paint her portrait years later from memory I placed the subject in the Elizabethan era. She was in many ways traditionally old-fashioned in her outlook and curiously mirrored Elizabethan Englishness despite her mother being Scottish born and bred. Her father was every bit a Londoner. They represented a type of person who no longer exists, as London itself no longer exists, which is perhaps another reason I was drawn to placing her in the distant past. Her views today would be regarded as indubitably politically incorrect. But not so much back then. What I liked about Zibby was her infectious sense of humour, plus the fact that she spoke her mind without fear or favour. She had wit and showed immense generosity to those whom she liked. Her tongue could sometimes be acerbic, as well as soft; yet she was always true to herself and that is at the heart of what really counts. I appreciated her honesty, and continued to know her until her divorce from Arthur at the turn of the 1980s. This was followed by my accidental encounter with her and her daughter, Jacqueline, a few years later along a busy Kentish Town thoroughfare. I never saw this unique woman again after that meeting. Zibby belonged to a breed now practically extinct. The pictures of her holding a saxophone were taken at my studio in the 1960s. She died in October 2014.